Only about 25 kilometers from Benidorm lies the former Guadalest fortress on top of a mountain. The town with the 'hanging castle' is a tourist attraction and was declared a monument in 1974. There are numerous museums and historic buildings to visit. Furthermore, various souvenir shops with trinkets, restaurants and artwork. Also the castle ruins or a boat trip on the reservoir, which lies below Guadalest, make this town really worth a visit. 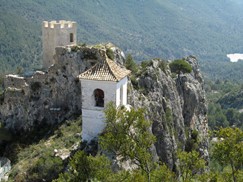 Elche (Elx) is located about 23 kilometers inland from Alicante. Elche is known for three things: the palm groves (El Palmeral), a medieval play (Misteri d'Elx) and the bust 'Dama de Elche'. Approx. 2 kilometers south of the current city is l'Alcudia: the former Elche. In the time of the Moors, the city was moved and surrounded by palm trees. This oasis was declared a World Heritage Site in 2000 and the palm trees can not be felled. L'Alcudia is an archaeological site of, among other things, the bust of the Lady of Elche (Dama de Elche). The artwork has an oval opening at the back to the hollow interior of the sculpture. Recent studies have shown that this image served as a storage place for an urn. The original sculpture from the 4th century BC is in the Archaeological Museum in Madrid, in Huera del Cura is a replica. 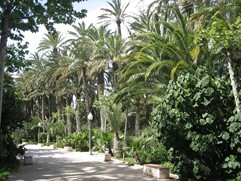 El Peñon de Ifach, about 332 meters high and a striking landmark on the Mediterranean. The name derives from the former name 'Northern (Ifach) Rock (Peñon)' which was used to distinguish it from its brother (rock of Gibraltar) in the South.

Most people who fly to the Costa Blanca do not see Alicante more than the airport. Too bad, because the city itself is certainly worth a visit. The central point in the city is formed by the Explanada de España, a beautiful promenade that is surrounded by greenery. In Alicante is the Castillo de Santa Bárbara, a castle on the top of Monte Benacantil. The castle can also be reached by elevator. . 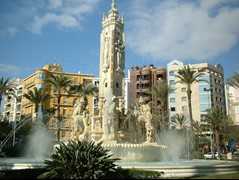 Of all the towns along the coast, Altea is certainly one of the most beautiful. It concerns the old town with the beautiful Virgin del Consuelo church, the square in front of the church (with a beautiful view over the city) and the white houses with a large number of art galleries. 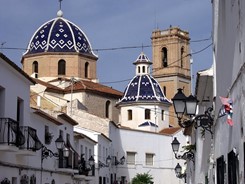 You love it or you hate it. A middle road does not seem to exist for the high-rise holiday town of Benidorm. This is mass tourism in its most extreme form that you can imagine. This makes Benidorm a landmark in itself. 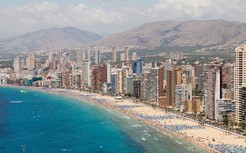 Valencia is the capital of the Costa Blanca and was founded in 138 BC by the Romans and since then has offered many cultures and religions a 'home': a fascinating city to visit with a mix of history and new architecture. An old city with monuments, old customs, but also a new city surrounded by a large number of small towns and cities. They merge and the thousands of commuters, tourists, students and artists make Valencia a lively city. Beautiful buildings, rich in celebrations, year-round, known for its fruit and the Paella. Valencia has beautiful plazas, beautiful beaches and there are shops, bars and restaurants on every corner. An agricultural center (rice and oranges), a port city and health resort (beach) but also an industrial city (furniture and mechanical industry), a famous university city and a conference and trade fair city. 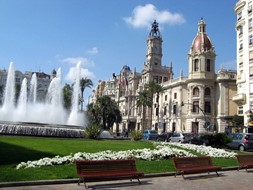 Villajoyosa or La Vila Joiosa (as it is called in Valencia) is the historic capital of the Marina Baja district. It has something special that makes you want to come back. Villajoyosa is only about 20 km south of Benidorm. With its colored fishermen's houses in the old center, which can be found on every postcard, the Amadoria river that flows through the city, miles of sandy beaches and the promenade towards the harbor. When you enter the town you smell the aroma of the chocolate. In the 18th century, the cocoa plant was started importing from Ecuador and Venezuela. Nowadays, the (Valor) chocolate is for sale all over the world and Valor has its own stores in Spain. The local specialty is churros with chocolate: very suitable for a cup of hot chocolate. The chocolate factory Valor may be the best known but there are also other chocolate factories in Villajoyosa: Perez and Clavileño. Another local specialty is the Nardo drink that is made from coffee mixed with absinthe. 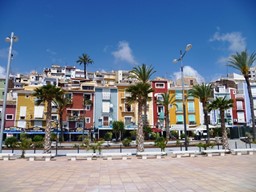 The feast of the Moors and Christians is celebrated exuberantly in almost every village and city on the Costa Blanca. This authentic Spanish feast is accompanied by beautiful parades, lots of fireworks and a big party with delicious food and drinks. The most grand and famous Moros y Cristianos festival can be found in Alcoy (Alcoi).

The waterfalls and the natural park of Algar are fantastic to see and you can also swim in it. The water is very cold, but very refreshing. Not only holidaymakers come here, also the locals come from far to take a dip in the natural pools of the Algar waterfalls. 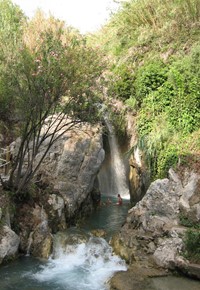 These limestone caves in Busot form a beautiful collection of irregularly shaped caves with stalactites and stalagmites.

Within the Costa Blanca you can choose from a large number of markets to visit. Most of these local markets have an offer that unfortunately is not very distinctive from the rest. The typical Spanish dresses, the cheap sunglasses and the bags that are very similar to certain expensive brands. The flea market that is held every day in the village of Jalón is a relief. Antiques, trinkets and art form the main part of the offer. Who is on time can first go and taste wine in the opposite wine cooperative. 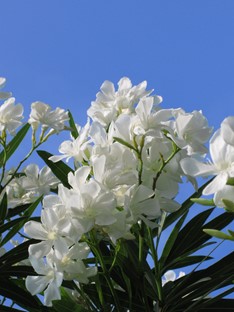